Right after I finished watching Hell In A Cell, I went to Twitter.

My initial feeling was to feel somewhat disappointed by the ending to the main event, but I wondered if more people felt the same way, as the match was main-event quality.

And featured the return of a very well-liked character.

So, maybe, just maybe, you were willing to sacrifice the decisive finish for what actually transpired.

In typical fashion, both sides of the argument were well represented.

@heelbook i have no problem being stragically left hanging in order to pay it off in a bigger way later. STAKES.

@Heelbook It was AWESOME! Wyatt/Ambrose feud will be amazing, and don’t worry guys Seth and Dean will get their unclosed feud back someday.

Others not so much:

@Heelbook Couldn’t they have had Ambrose win it, then get attacked?

@Heelbook Took the PPV down from an 8 to a 5 for me. Horrible.

@Heelbook They ruined a great match.

You get the gist of it.

There are both Pros and Cons to booking it the way WWE did.

So let’s run all of them down.

While Wyatt’s push remained arguably salvageable following his Mania run with The Eater Of Pushes, his feud with Jericho was surprisingly lukewarm and never delivered what looked to be a moneymaking program on paper.

Then, there was the whole “Cena lost to Brock so he has to look strong for the rematch” thing, which prompted Cena squaring off with the whole Wyatt Family after a match, and putting them all out of commission.

Can we get a time of death on this push?

Fortunately, Hell In A Cell may be just what the doctor ordered to reignite it. His return was unexpected, impactful and generated serious repercussions in the main event. 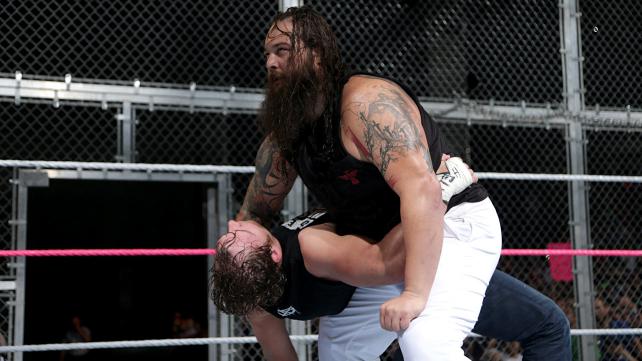 And, immediately, the potential of Wyatt vs. Ambrose is capturing our imagination.

I think I know what you’re going to say. “He didn’t get his win…yet.”

Here’s the kicker for me. This feud is probably the longest-lasting feud WWE has done for a while now.

The matches have all been about how they’re a stalemate until someone interfers. At which point, Rollins wins.

Eventually, the chase must wind down. The (anti) hero must catch the villain. 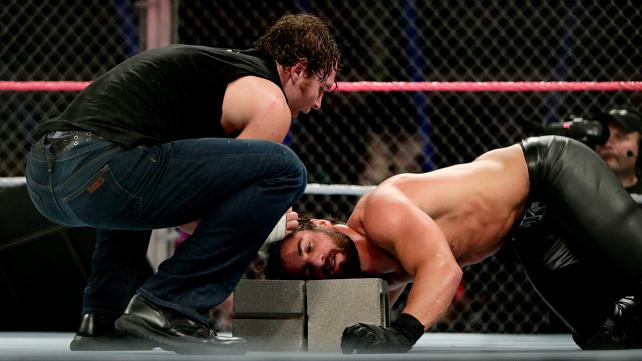 This is especially critical in a moment where Ambrose is being chosen by the crowd as one of its own. The Bryan/Punk of the Year, if you will.

And, after beating Cena in a heelish way that did nothing for him (benefiting from The Authority’s interference), bringing out Seth Dollins for a weird vintage-WWE-writing segment, my fear is we’re seeing some nails appear in his push’s coffin.

For such an organic push to stay safe, the best bet is to keep the wrestler away from losses, overbooking and any result that isn’t merit-based. See CM Punk vs. Triple H 2011.

Had Ambrose won decisively last night, he would be much better suited to cement himself in the upper echelon. He can’t keep chasing and getting nothing. After all, he’s DEAN. FU*****. AMBROSE.

But, as many were right to mention:

This feud is clearly one of those “lightning in a bottle” feuds, of which WWE hasn’t generated many in the last couple of years. 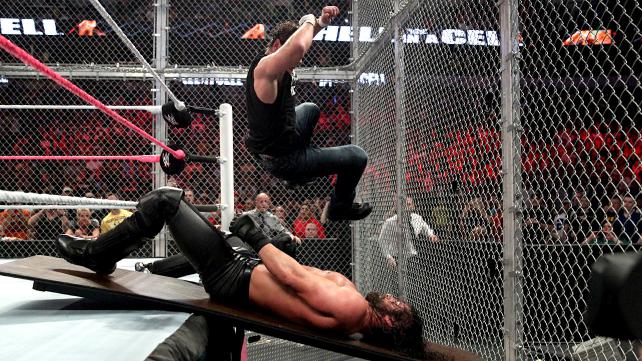 Taking that into account, WWE could be trying to hit “Pause” on it and pull the trigger later, banking on the fact that the magic will still be there.

From this perspective, this booking decision makes sense.

But… what about the fact there’s:

When you buy a ticket to watch a movie, your expectation is to watch a story that takes you on a journey and provides you with an adequate conclusion.

That means actually presenting the end to that story. Unless you’re David Lynch or you can get away with cutting a movie in half because it’s Lord Of The Rings Part Two.

When UFC markets one of its PPV, it couldn’t be simpler: 2 men will fight. 1 will win. Sure, a few times, sh** happens (a bad call here and there, a draw, a very close fight), but what sells the event is that a fight is meant to be as decisive as humanly possible.

For all intents and purposes, you will see a conclusive ending.

In other words, a story that comes with a price tag should, for the most part, come with a decisive finish (or a non-finish twist so strong and mind-blowing that no one feels short-changed).

They sell us with the setup. We pay for the, well, payoff.

Therefore, I guess I’m asking you if Wyatt’s return to interrupt a 5-month-long feud as it’s about to conclude qualifies as your “such a cool twist, I’m not even mad Ambrose didn’t get the win”.

If it does, you didn’t feel short-changed.

From my own estimation, this was a proper moment to reward the paying fan with a legitimate finish. Each to his wallet?

However… I can see the benefit behind this:

Like Ambrose, Seth Rollins is very close to breaking into the upper echelon. His wins, his gamesmanship with Orton (which he is thus far winning) and the progressive liking The Authority has taken to him are all working well toward Seth’s eventual shattering of the glass ceiling. 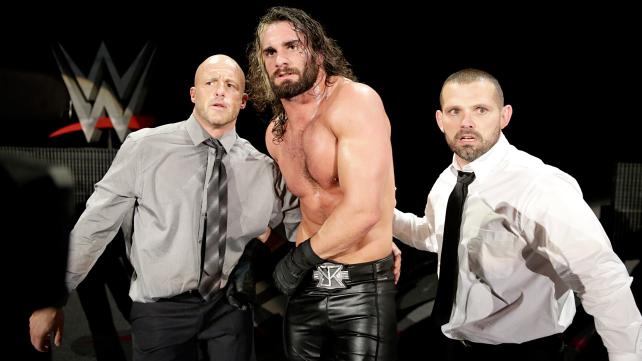 (Credit: all photos from WWE)

Had he lost to Ambrose, part of his heel aura would be gone. As of now, he’s still getting away with it. And, in a world where legit heels are counted with no more than one hand, it makes sense to protect a manipulative, gets-away-with-murder heel like Rollins.

And the final con:

Con #3 – Too Much Baiting, The Fish Swims Away

There’s a risk that comes with all these inconclusive WWE PPV finishes, for which 2013 was a gold mine and 2014, while falling behind, still presents a healthy dose.

If the stories are always progressing along with twists and more twists but no conclusions, why are you buying them pay-per-views?

If a story never really ends and just keeps leading into the next Monday Night Raw, does it not make sense to just watch Raw and skip the episode we’ve come to know as “pay-per-view”?

After all, there are already so many of these episodes on free TV.

By keeping PPV finishes overbooked, WWE runs the risk of cultivating too much of an “episodic culture” and less of a “setup and payoff” mentality, which is the basis for any pay-per-view/subscription business.

With most episodes on free TV, a lot of people may be willing to skip the “special event”: because you have to pay to see it and, experience an overbooked finish enough times, and you’ll start believing the next event won’t provide you with the payoff you’re looking for.

There. I think I’ve stirred this up enough and given you the point-counterpoint.

Where do you stand?

I’ll talk more about this on the podcast this week.