Home / Articles / The Best Wrestlemania Matches Told To You In Memes

The Best Wrestlemania Matches Told To You In Memes

As Wrestlemania nears, I find myself going over the most memorable moments of the franchise and remembering a few details of what stood out to me – or, you know, just plain old being a smartass about said details.

So here’s a stroll down Memory Lane with the world’s most inconsistent creator of wrestling content.

The matches are in no particular order.

19’s closer was as intense as it was technical. A drag-out between two great performers that seemed to be heading toward an epic.

Until Brock Lesnar decided he was going to try the Shooting Star Press from his OVW days. And turned in the air way too late. Concussion city, bitch. 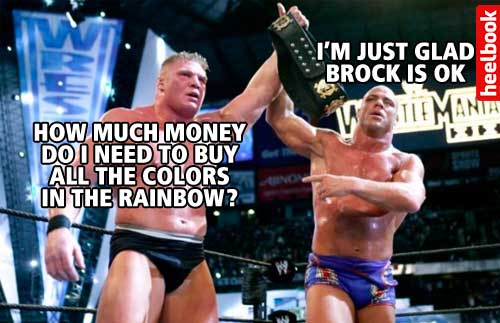 Considering both Triple H and The Undertaker are still active wrestlers, it was never really clear why they called the match “The End of an Era”. Oh well.

The match itself had a lot going for it, but the highlight for me was the retired Shawn Michaels’s performance as referee, just wanting the match to stop, and not being able to withstand another near fall.

Or was that really the cause for his torment? 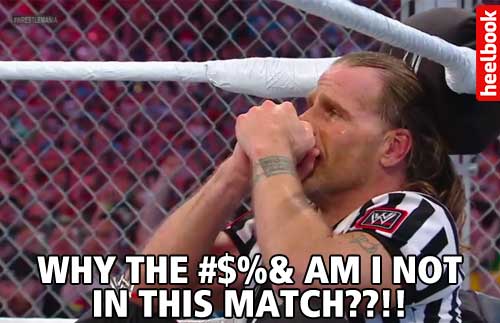 And why, you ask, was Shawn Michaels retired at that point…? 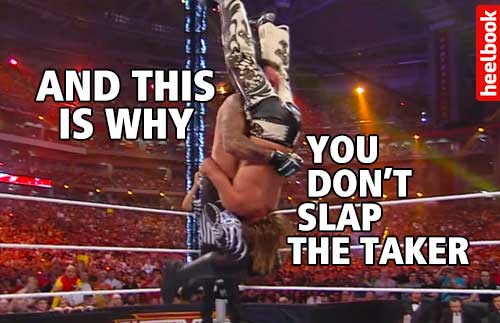 WWE’s inaugural ladder match was memorable, to say the least. But it was only inaugural in the sense that it was the first one to make it to air. Previously, Bret Hart had introduced Vince McMahon to the concept, which he had brought over from his father’s Stampede Wrestling.

The Hitman wrestled Shawn Michaels in a ladder match at a Wrestling Challenge taping, but it never made it out of the cutting room.

Bret may have been in the main event – and triumphant – that year, but something tells me this crossed his mind: 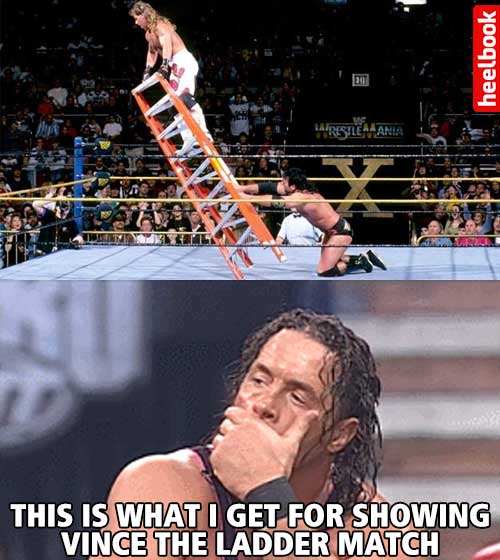 Who can forget this? 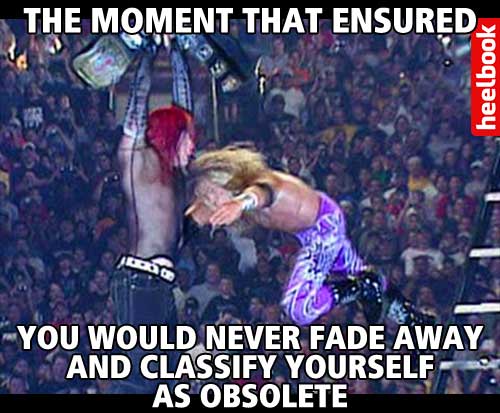 Hulk Hogan vs. The Rock. Who would have thought Hogan would still be kicking it in 2002 and in line for a match of this caliber.

While it was an epic, it wasn’t without its issues: 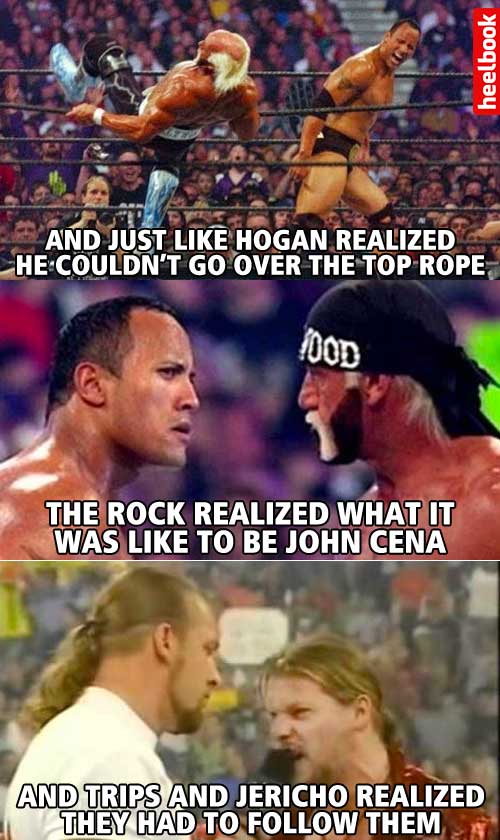 Macho Man Randy Savage was the worker’s worker before that was the “in” thing to be.

And that wasn’t any more obvious than when he wrestled The Ultimate Warrior in a Carrer Ending Match in 1991.

The Warrior, not exactly known for his mastery of technique or psychology, saw his match quality vary greatly according to his opponent.

Luckily here, he had Macho. 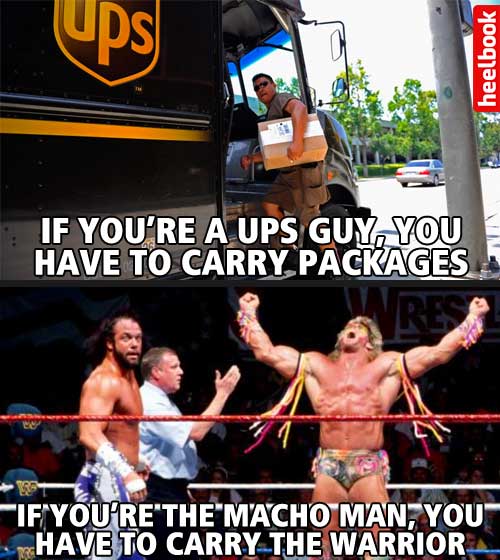 Savage vs. Steamboat was a high workrate match in a universally low-to-medium workrate WWE style.

The result? It immediately stood out.

Well, not to everyone. 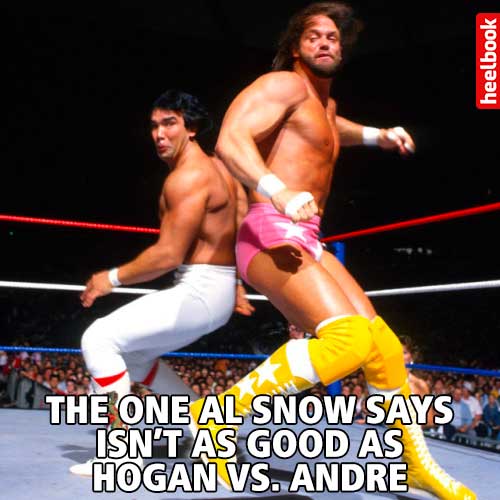 On the other hand, this was… 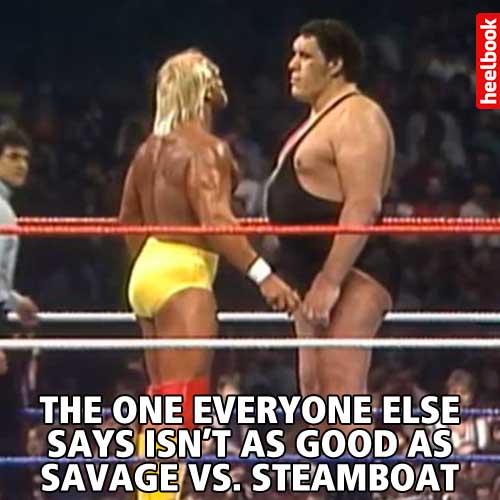 10 – My All-Time Favorite Match In History Ever (Wrestlemania 10)

Bret vs. Owen had everything going for it. Two people who knew each other very well in the ring, had a heated rivalry and the proper stage to give it their all. 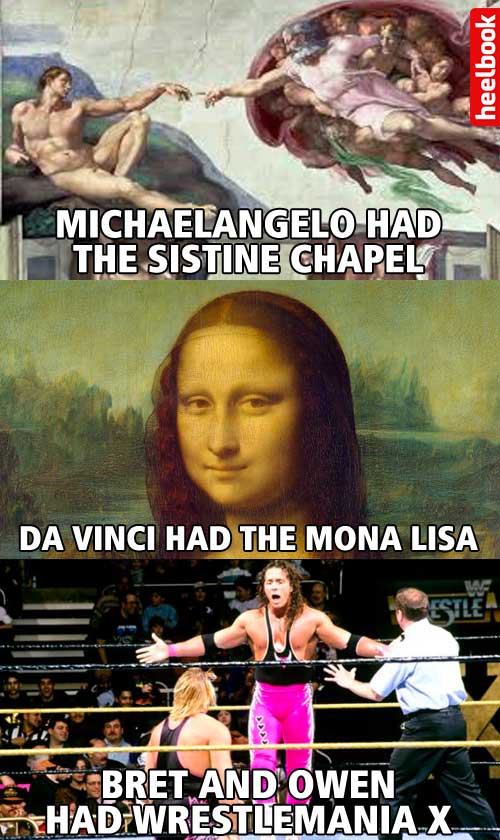 An amazing wrestling clinic and a lesson for every wrestling student to pick up and understand how to hold an audience’s interest for 60 minutes, without shenanigans or an avalanche of high spots.

Given how Austin was catapulted up the food chain with his Bret Hart feud, you know someone backstage were looking at this match and going: 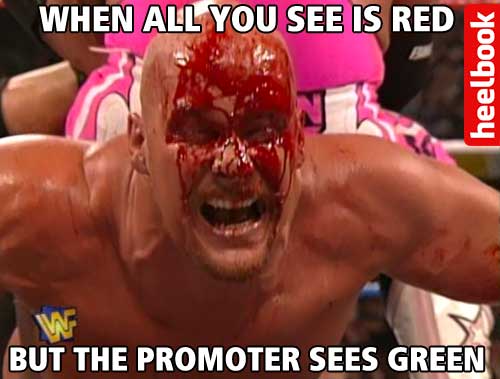 Of course, it could have gone better a few years after that. Austin and Rock had their Mania rematch, with one difference: they were now both at the height of their popularity.

However, the match’s incredible momentum is halted by the finish: McMahon comes down, hands Austin a chair and Stone Cold beats The Rock to a pulp with it. Shakes Vince’s hand as the Texas crowd is still solidly in Austin’s corner. Albeit confused.

To think that this was Austin’s idea.

The lesson? You don’t turn a heel… heel. 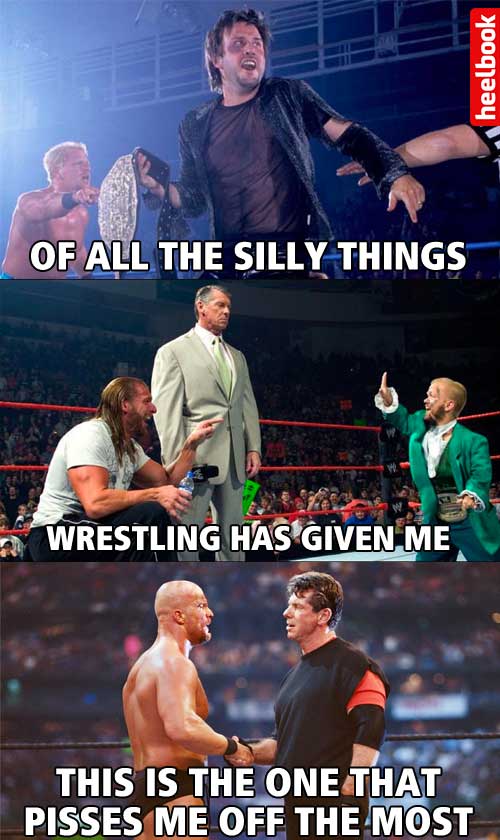 Thanks for reading. I’ll be around for a few days of Mania coverage. Or, in my case, probably a nice, healthy diet of “in my time, it was better.”

Heelbook is a former social media page, now hellbent on wreaking havoc on the Internet.
Related Itemsfeatured
← Previous Story All Wrestlemanias with an Honest Slogan
Next Story → Wrestlemania 34 Predictions: What Will + What Should Happen